Contents: 16 February 2014
Stephen O’Rourke’s Cuba
Till a horsefly arrives: Joselyn Duffy Morton
Degustation:ed
Valentine cartoon: Claudia Ward
French bees are dying
Bordeaux photos: Roger Morton
High Jump in California
The Philippines: Chrissie Mougne
Bangkok shutdown: Daren Blake
Cover caption: Camel packet, Roger Morton
Editorial: 16 February 2014
When it stops raining I will plant my 75 bulbs. (In the last few weeks, this has almost become my mantra). Mind you, we have played numerous games of table tennis in brilliant sunshine (using the new net that arrived in the post from our Auckland friend Robert). So far it has been a mild, pleasant winter. I look with horror at the flooding in the UK. What a disaster. The rain has no pity, it just keeps coming fuelled by the wind. It is a horror story, some poor people have lost most of their household possessions.
Will the British Politicians be prepared for next winter? Climate deniers are in the news daily. They are the people who, for whatever stubborn reason refuse to accept that the human race is having a detrimental effect on the climate around the world. It is a puzzle to me, because it seems so obvious – like burning a fire every year and never cleaning the chimney, it is obvious the chimney will get clogged up. Simply put, it is cause and effect.
The other important question that many British people seem to be ignoring is ‘Will Scottish people vote to leave the United Kingdom? What will it mean if they do? Will it raise the Scottish morale? Will it lower the English economy? What was the currency unit in Scotland before they threw their lot in with the English? Does Scotland have any claim on the pound whatsoever? Or maybe the Scots will look over the Scottish Channel and happily embrace the Euro.
Clinically thinking – it does seem odd for people to want to break away when there are so many problems to solve, and we should all be combining our resources to solve them. Some days ago, people around the world shared their grief at the unexpected death of the magnificent actor Philip Seymour Hoffman.
Addiction is another of the world’s serious problems that we may not be paying enough attention to. It destroys individuals, families, sometimes even communities. Unfortunately a great deal of money (legal and criminal) is involved in the tobacco, drug and alcohol industry, addictive prescription drugs; sugar or sex addiction – not to mention the other economies that satellite around them; those of private or state prisons, the law, the health industry. Addiction will take some solving.
Monday, we spent the day in Bordeaux - a movie with friends, lunch at another friend's house, a wander round to find the red leather slippers for Roger in the small Moroccan shop with the smiling and patient shop assistant; I love that city.
Francois Hollande and Barack Obama seem to be buddies now. Intriguing. Lover boy Hollande managed to do the US trip without a First Lady. Wonder what his next step is … it’s a funny old world. Let’s hope it keeps turning not flooding. Joselyn Morton
please remember to go to older posts, I still haven't figured out how to stop the blog doing this - today's last new piece is Daren Blake's take on the Bangkok shutdown, followed by our Cover caption to finish as usual. ed 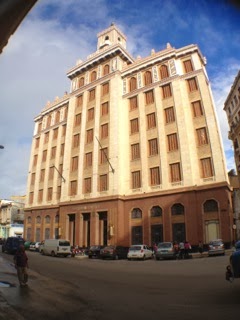 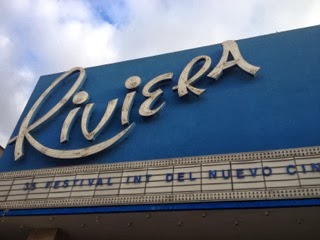 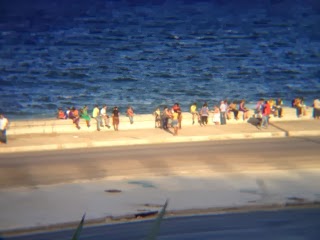 The sea wall in Havana 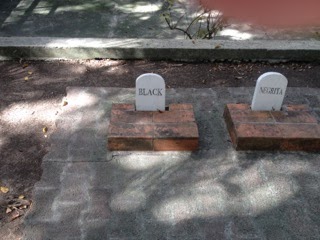 Hemingway's 2 dogs in their graves 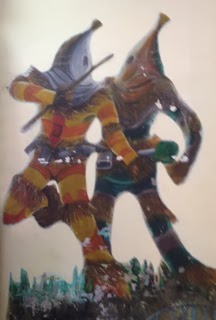 When I went to Cuba last December I realise now I was carrying with me a few preconceptions. There was the received images and messages of the Castro revolution, The Buena Vista Social Club movie and record, and Cuba's rep as a high cred destination. What was confusing was not fully understanding this at the time of my visit. In addition to the above was the extremely high cost of visiting a country where conspicuous consumption was not really part of the cultural landscape. Finally as a first world layabout I carried with me an inbuilt punishment mechanism that meant I spent the time in Cuba in pain and reliant mostly on my government subsidised and supplied.painkillers which added to my confusion.

So having said that I will try to recount my trip.

First two things I have to stress is that it’s a very very long way - plus business class is the new economy.  Good wine and a reasonable choice of movies does not compensate for flat beds that are not really flat no matter what qantas may say. What happens to my body is it is stretched at just the point where my government provided life-long disability is at its weakest. Fortunately this time the pain was worse when I tried to lie for down to sleep or when I sat in a chair too long. I say fortunately as the best thing to do in Havana is to walk and walking was when the the pain was almost non- existent. Of course walking 4-5 hours a day makes old people tired and desire sleep - which became my torture time.

Because American politics are pretty crazy a small group of ex-pat Cubans living in  Florida causes some difficulty in getting to Cuba from Australia not to mention the difficulty the US embargo causes the Cuban people. Having found a French company to provide the compulsory travel insurance Cuba now demands we then had to fly via Mexico to get there. Going from Spain or Holland is easily the best way to get to Cuba unless you live in Canada or Central and southern America.

Tourists are the one concession the Castro government make to its low-paid people. We are like ripe fruit just for the picking and it starts before one leaves the terminal which is a peaceful and well-run place.

The taxi driver walks quickly through the arriving tourists and hooked us very quickly. His logic on the price was a dollar a kilometre - plus a tip. So for this trip he gets about three weeks wages. It’s not that I minded because after all Cubans are cultural heroes and paying a higher - maybe fairer price - is part of the cultural Odessy we are on.

Travelling at high speed down the good road into town I see my first American 'collector' car; I was now excited having grown up in an American Colony - New Zealand. I had been in love with American cars since birth.  These Yank Tanks formed about 25% of the traffic on the roads and were mostly used as a plan b bus/taxi service that took bunches of people where they needed to go. A small number of these cars were beautifully restored and could be seen carrying groups of adoring young tourists around the town while the majority were held together by goodwill and luck. The V8's and straight sixes had long been replaced by diesel engines from South Korea. The body work on the now restored cars was largely hand beaten and these 'collectibles' as they are known seldom had luxuries such as window winders and door handles but fully restored and just surviving they provided constant flow of groovy shapes and colours 24 hours a day.

We were booked into Hotel Santa Isabel because one of our heores, Pedro Almodavar had stayed there as did Jimmy Carter the only American President (ex) to visit Cuba. The Santa Isabel sits on the edge of Plaza de Arms in the 'historic centre' of Havana. And the precinct surrounding it, is a no-cars area.  The Guardian says it’s the best hotel in Havana and there are many good things about it. Built as a flash townhouse by a Spanish wide boy who must have had a few bob because even with slave labour it was very grand with its Arab style made more florid by adding lots of Italian marble. Still location is everything as we know and putting aside the fact that all the impressive buildings have been built by either local slaves or imported models snatched from their lives in Africa and transported to this European Colony to provide the necessities of life for the middle class expats plus earn them enough to afford a faux European life style on this beautiful Island with ample rain and a perfect climate.

Sugar and Tobacco would bring the cash, the Catholic Church the moral clearance with the Spanish Government providing the protection for the hotel racket. After the British banned the transporting of slaves, Cuba became a slave breeding ground having as many as 400,000 slaves at its peak.

Ok so this much we all know so back to the present. Plaza De Arms had buildings from the 1600's. A strong-looking fortress and Church on one side; the old American Embassy on another and the grand Govt admin building like a grey stone version of a large Arab house built around an internal courtyard. The streets running off from the plaza were various ages but mostly 19th century.  Being free from cars and trucks they give a feeling of life before the internal combustion engine. They must have been very strongly built as most are still intact in spite of seeming not to have had any work done on them for many years.

There are almost no shops visible at first apart from the tourist souvenir shops selling junk mementos that few tourists would buy. I saw one shop selling shoes for women and a couple of shops in another square with brand names like La Coste but generally shops did not form part of the streetscape. A recent liberalisation has allowed people to open restaurants and there were dark shops either providing the 'free rations' each Cuban is given monthly or little markets where fruit and vegetables were for sale for Peso that only Cubans were supposed to have.

A tourist must change their foreign currency for Cuban tourist money known as CUCs. Locals only handle CUCs when they go to the bank to exchange them for Pesos. Everything and every service has two prices  - the Peso price paid by Cubans and The CUC price paid by foreigners. It takes a day or so to stop taking change in Pesos as they are worth considerably less that CUCs. Latest news is there will soon be a one currency system. God knows what that will mean to this population that feels tired of the poverty caused by the embargo and the apparent lack of imagination of their political masters.

So there are many streets to walk up and down; many beautiful European buildings from the 1600's to 1960's and the more utilitarian buildings built after the revolution.
Enough for now more to come.
Stephen O’R
No comments:


Till a horsefly arrives
Swimming in my friend’s pool
quiet, cool, alone, alive a world away
from bankers greed, chemical warfare
Russian perversion. Adopt a child,
hope he won’t turn out wild
pool perfection till a horsefly arrives,
dives, determined, destructive, foul-mouthed.
I plunge, swim a length underwater
it hovers there, waiting for my head to emerge. 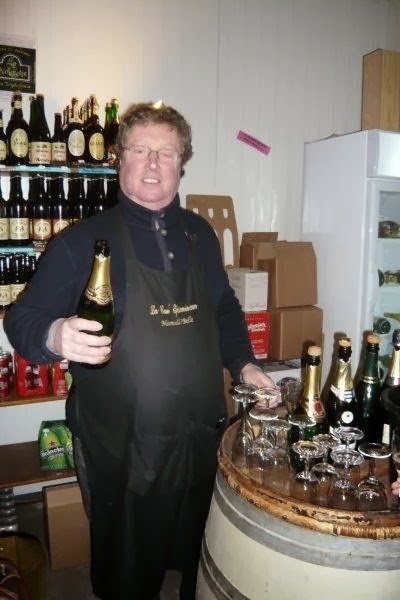 We recently were invited by Thierry and Patricia Lannier to a degustation at La Cav'epicerie at Mareuil sur Belle 24340.
It is a treasure trove of wine, champagne and aged Scottish whisky (and I kid you not, Japanese) As well there seems to be an endless selection of beer – not usual in the rural French countryside (this included Roger’s favourite, Adnams). I am far from an expert, my eyes were out on stalks as I tried to take it all in. The owners, Thierry and Patricia have a great love for their business and are incredibly well-informed – I wanted to remember it all, but of course, I haven’t. ed