Hello again,
It was funny women to the fore this Saturday: Pauline McLynn talked to Ed Doolan at 8am, June Whitfield looked back over her radio career at 9am and there was late night stand-up from New York with Whoopi Goldberg at 10pm. More details below.
Two weeks ago, Barry Cryer’s Comedy Greats looked at the role of the BBC Transcription Service in adapting shows for audiences overseas. So we were delighted to hear from Gary Critcher, who began his first job with this department back in 1976 - moving on to look after the Tape Library from 1979-1983. Gary explained: "I was in charge of releasing and wiping tapes - only after a producer had put pen to paper to authorize it though". Lists were periodically agreed in order to create shelf space - and to save the BBC money by re-using the tape stock. Dealing with both radio and TV archive, Gary prides himself on saving the 1964 'Top Of The Pops' TV master tapes - a pilot sent out to overseas broadcasters to see if they would be interested in a weekly version. And just what did those two 10 inch reels contain? A mere three 'live' Beatles tracks and two interviews with the Fab Four. Happily all 3 tracks were later released on a 'Beatles at the Beeb' album.
Gary also recalls the very hefty sounding 16 inch 78 rpm Transcription shellac discs from the days of Hancock’s Half Hour - which reminds me to alert you to listen out next weekend for our exciting re-discovery. Courtesy of the late Bob Monkhouse’s very own archive - we’re playing a sketch starring the usual Hancock team that’s not been heard in over 50 years! More details in our next newsletter, which after nearly 10 years, will have a fresh new design.
Starting next week - in line with the rest of the BBC - our newsletter will look like our webpages, with better links to our programme highlights and better images.
A last word on the BBC Transcription Service. According to our office boffin Mik Wilkojc - some early programmes were transferred to vinyl for flights overseas, because of the fear that going over the North Pole would erase early tapes! Honestly, every pub quiz team needs a Mik.
Many thanks again for another cracking set of Tweets this week. We read them all - so please keep them coming via Twitter to @BBCradio4extra:
Couldn't resist any longer; had to dig out another adapter to replace my broken one so I can listen to @BBCRadio4extra."I didn't recognise you." "Why not?" "I've never seen you before." The Goon Show @BBCRadio4extra . You don't get that on the Today Program.Will be timing my lunch hour to listen to Agatha Raisin and Hammond Innes - wonderful @BBCRadio4extra ! Classic drama on R4 Extra ‘Lorna Doomed.’Come up to bed! Listening to the Comedy Club on @BBCRadio4extra : Y'know why I love listening to @BBCRadio4extra? It is impossible for the end credits to be squashed so small you cannot read them. And my quick thanks for a smashing email and a special hello to huge 4 Extra fan, June Bowden and her guide dog Rosa.
Peter Reed
Senior Producer
BBC Radio 4 Extra
2 comments:


Contents 17 July, 2012
Mel’s Nepal: Mel Philipps
Champagne and soft cashmere: JD Morton
Claudia Ward’s cartoon
Photos: Roger Morton
Stephen O’R’s Sydney
17 July 2012
Despite my best intentions, the weeks have slipped away. Firstly we had 3 great weeks in the UK – I decided the time with our small grandchildren (and the big one) was too precious for me to skive off and do the blog. I guess the rot set in without me noticing it.
We had only been home two days when Roger got sick and it’s been a rocky roller-coaster since then. For example we were at Dr B’s until well after 7pm this evening. Tomorrow morning I drive 20k return trip to the  friendly pharmacist for the next load of anti-biotics. Meanwhile summer has finally arrived and Roger is longing to be better and for the pneumonia to be gone. Curiously, there seems to be numerous cases around at the moment – haven’t yet discovered why. I do know I was diagnosed with it at 3months old. My cousin, 3 months older than me, had already died of it. My mother was told by the hospital to take me home as I was going to die and they needed the bed. That was red rag to a bull and so of course she got me better. (She then proceeded to torment me for the next 17 years – she probably realised what an idiot she had been. My father was in the war for another 3 years. She was home with me – she could have been foot-loose and fancy free!)
Meanwhile apart from the terrible weather this summer in England and France (flooding, hailstones, no sunshine) there have been some grand scandals. France’s new President Francois Holland was put in a compromising situation by his girlfriend Valerie Trierweiler – she tweeted support to the opponent of Segolene Royal. (Segolene is the mother of Francois’s 4 grown-up children.) They are now refusing to have anything to do with Valerie Trierweiler. Tricky.
The Hong Kong Shanghai Bank is being revealed as a big-time drug money launderer. Mexican drug barons are evidently involved. Very tricky. The CEO of G4S, Nick Buckles was today in a very tricky situation. At an inquiry into the sheer incompetence of his security company, who were meant to be manning the gates of the Olympics, which start in 10 days time – he was asked to answer yes or no to it being a ‘humiliating shambles’. He eventually replied ‘ I cannot disagree with that.’ How difficult could it be to find people to work at the Olympic Games? Evidently part of the problem was that they were not prepared to pay acceptable rates– even though they had a £284 million contract. Security guys can be hard men, would you want to piss them off? As in piss off a few thousand of them! Watch your back, Mr Buckles, you may be heading for a hiding to nowhere (whatever that means.)
And before I slope off to bed, it is with great sadness that I learnt pianist Jon Lord had died of pancreatic cancer. I send condolences for their immense loss to his family, especially Sara, Judith and little Reggie. The other evening we watched the film of Maryam D’Abo (one of Roger’s old clients.) Living with my broken brain was directed by her husband Hugh Hudson and it was extremely moving. It was intriguing to hear one of the UK surgeons say ‘I am an atheist – I spend my days fixing broken bodies – how could a god sanction such awful catastrophes’. I agree.
I also agree with the possibility of banning babies and little boys from being circumcised. They don’t need this surgery. It is an outdated religious practice. It is time to stop doing it. The ruling has come about in Germany after a small buy was taken to Emergency when his penis would not stop bleeding.
The other big issue to be addressed is population. Sir Richard Attenborough points out that in his lifetime it has gone from 2.4 billion to over 7 billion. He says this has contributed to climate change. The jet stream high up in the atmosphere has been seriously affected. It has made the summer one of the wettest in history. It’s a worry. A few days ago I discovered from a friend who visited and then went on to a nearby Buddhist retreat that there were 850 devotees (when does a retreat become an avalanche?) all of them paying something like 298euros for a week and doing some unpaid gardening. That’s a cool quarter of a million. I hope some of it is going into the rural French community where all this is taking place. Enjoy the sun; it’s been too long coming.
Joselyn Morton

Obsessive desire
for personal enlightenment
old-fashioned generosity
is but a distant memory.
Forever love hormone,
oxytocin lives on in
two polished brass plaques
though one of the doctors
died two decades ago.

Respect to the thirteenth
century poet Arnaut
Daniel who invented
la sextine (more to do
with six than sex) smiles for
Les Anges de printemps
red roses and daisies
hope flies in the air
not fear and despair. 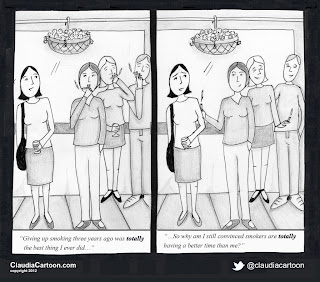 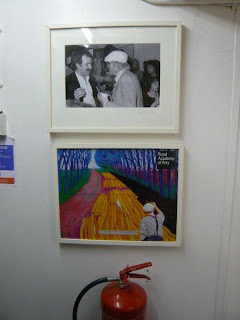 Bill McAlister and David Hockney – displayed on board HMS President, the Embankment, London. 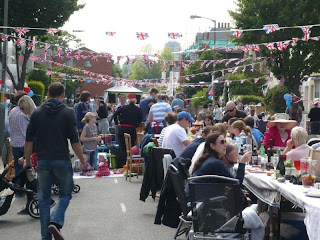 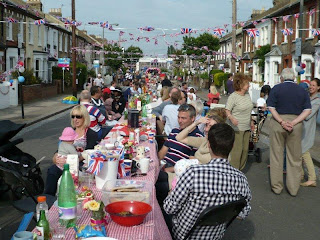 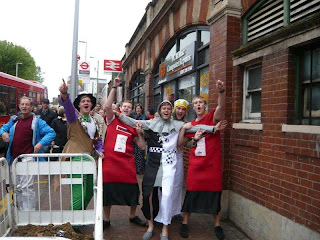 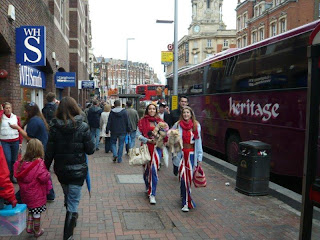 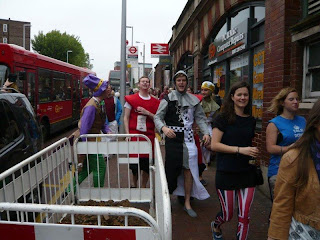 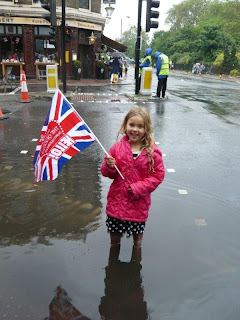 Young Star and her flag 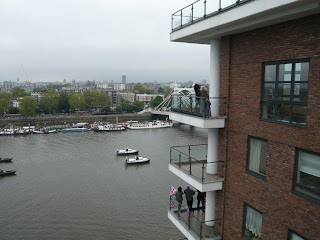 Us on the balcon 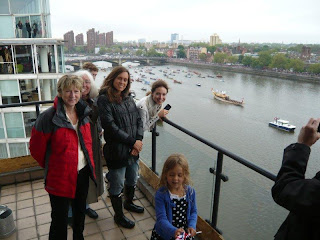 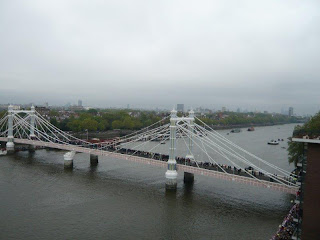 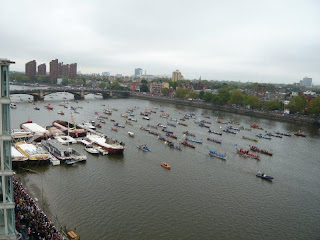 Boats on the Thames 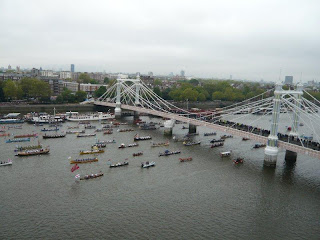 Boats by the Albert Bridge 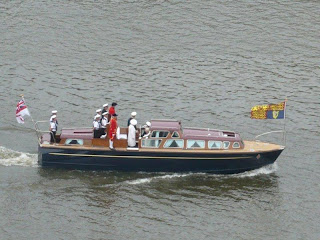 Queen on the river 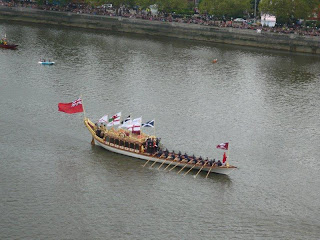 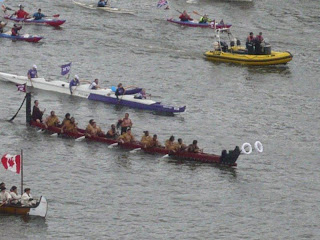 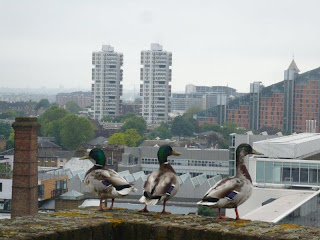 Ducks on the wall 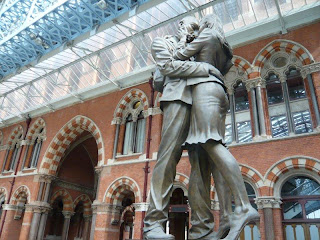 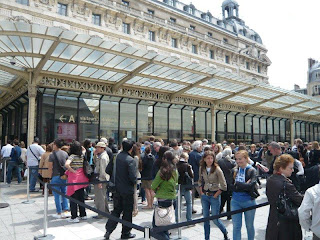 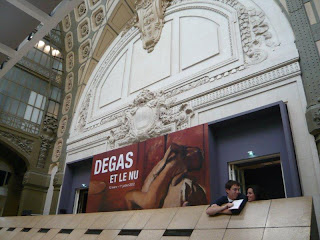 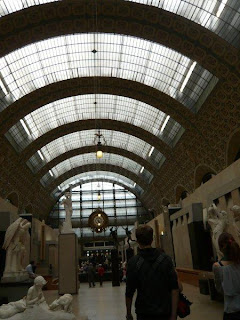 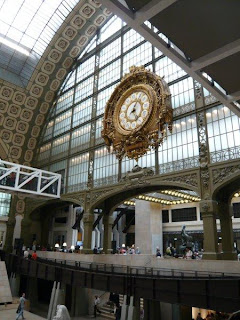 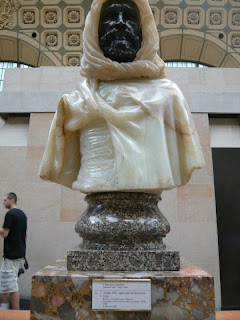 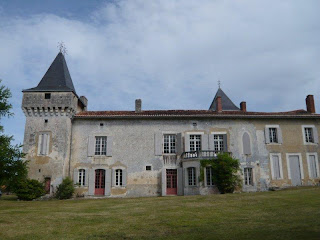