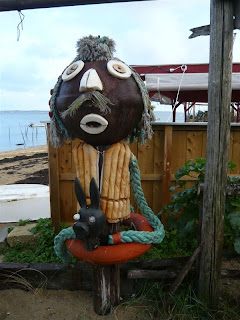 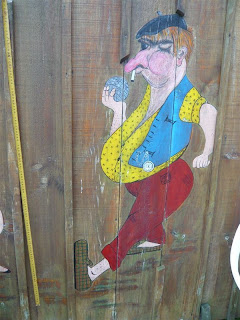 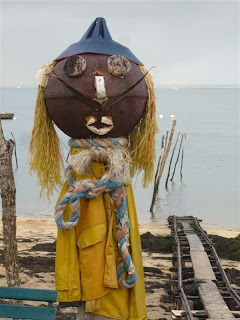 My Husband
Sometimes
my husband
stands stock-still
and stares
at a beautiful
young girl
(Her beauty
did not come as
a shock
her mother was
beautiful too.)
Why should you be
surprised?
This year’s butterfly
is always as
exquisite
as last year’s
Joselyn Duffy Morton ©
No comments:

Hello again,
On Wednesday this week, The Writers' Guild of Great Britain held their annual awards ceremony celebrating the best writing across media as varied as Television, Film, Literature, Video Games and of course Radio.
The awards were presented by David Quantick, an award-winning writer himself, whose work you might have heard on our network includes: Parsons and Naylor's Pull-Out Sections, On The Hour and The 99p Challenge.
David has also recorded a Comedy Controller for us (which you can hear again on Radio 4 Extra in the new year).
The Best Radio Comedy was awarded to John Finnemore, for his Radio 4 comedy, Cabin Pressure, and I'm pleased to say that we have scheduled a Cabin Pressure Christmas Special, to be broadcast on 21st December. And the very first series of this popular airline comedy is set for take-off once more on 4 Extra in the new year.
The Best Radio Drama award went to Ed Harris for Troll and the Best Short-Form TV Drama was awarded to Peter Bowker for his fascinating TV drama, Eric and Ernie, the story of the early careers of Morecambe and Wise. The original idea for the play apparently came from Victoria Wood, who also played Eric's mother in the production.
Victoria is a wonderful performer and writer, and it came to me as no surprise to see that she was honoured with the top award of the evening, the Special Award for Outstanding Writing. It's the first time a woman has received this accolade.
Victoria is best known for her television comedies such as Acorn Antiques and Dinner Ladies, but she has also appeared on radio, notably in the radio version of Pat and Margaret  and also as a castaway in Desert Island Discs (recently repeated on Radio 4 Extra) plus a delightful spoof on The Archers - Victoria Goes to Ambridge (produced for Comic Relief).
My congratulations to Victoria on her award, and I hope we can repeat more of her radio work soon on Radio 4 Extra. 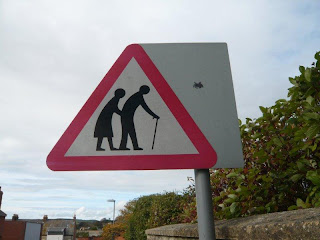 Sydney Nov 2011
Weather hot, balmy
This time of year near me there is an event called sculptures by the sea where a large number of sculptures are installed on the rocks between a pathway that runs between Bronte Beach and Bondi beach. (www.sculpturebythesea.com).
This pathway is sublimely beautiful twenty minute walk and even before the artworks arrive. Waves crash in over jagged rocks in a constantly changing series of mini vistas linking little beaches.
Now the thing is that many people who live in beachside suburbs hate that other people come to use their beaches and their surrounding coastlands. Beaches are supposed to be empty according to the narrative and narcissists who like their bodies brown and well shaped like to work out in peace. No group is more aggressive in the protection of their rights to have complete freedom to dominate the coastal pathways that have been built with community funds (their rates) than the joggers, who insist on maintaining their speed no matter what, so when for three weeks every year people are mowed down when the pursuit of the perfect body clashes with the lingering look.
We await the outcome of this clash of civilisation.
I had an email from a dear friend who came to Sydney as part of a small group with an Iranian film in 1986 (The Runner, Director Amir Naderi). She had returned to visit her family but months had past and I had received only one short email saying that computers were hard to get to.  In my paranoia I began to worry that she was trapped there I went to her house to try and find some news of her. She lives in a part of Sydney where women mostly wear least the hijhab, many the burga and even men are dressed in medieval Islamic costumes. Station wagons driven by Muslim women with children and scant regard for the speed limit, as they negotiate their lives on phones. The young ones in pairs drive even faster texting, seemingly without looking, as they overtake on the inside down dusty streets.
I get to the house the garden is dry and overgrown my anxiety increases.  My friend had transformed the small rundown wooden house into a beautiful haven with a garden that was an Oasis. Now I have paranoia 101 ‘they’ have knocked her off in Iran and stolen her identity and now they have her house. I knock. No answer, I hear movement. No answer. I knock again. “Who is it?” calls a heavily accented voice. “Hello” I call out.  The door unlocks and opens.  A bearded man looks around it. “ I am looking for Beh’Naz”,  I say.  “She is in Iran”, he says.
He tells me she will be back in October but when I turn 65 on November the 8th and I think who I want to come to my birthday lunch I realise Beh’naz is still not back. I call her house, her mobile phone, I text her, I deposit $50 in her bank with a note for her to call me, I email her.  I am now really concerned. I realise I don’t know her daughters phone number or address. I remember she had a fried Nas’ran whose husband worked for Qantas. I call them. They think I am mad. I plan to drive back to her house and talk to the bearded man again. What if she has just died, maybe the cancer came back. Maybe this is what happens when we have friends who live in other parts of the world they just disappear and that’s that. Finito. No more. No good byes. Just no more.
I turn on my computer check the stock market stupidity for the day then the emails and there at the top of the list is an enquiry from Jos about a piece while at the bottom of the list is an email from Beh’naz.
She is returning Dec 9 to pack up and sell her house. Her mum is dying, her sister is sick, her brother is tired of looking after them on his own and she thinks that a small house in a village in Iran might suit her just fine.
Stephen O’R
No comments:

Hello again,
Armistice Day is always a poignant time, as we pause and remember those who lost their lives, not only in two World Wars, but also in conflicts and wars since then.
The eleventh hour on the eleventh day of the eleventh month, when the Armistice was signed is marked today, in an eleventh year, 11/11/11/11, making a magical mathematical number - an eight digit palindrome (12 digits if you include the 11th second and 11th minute).
To commemorate such a special day of remembrance, we wanted to bring you some very special programmes, some of which have been highlighted this week in several press previews.
In the current Radio Times, Radio Editor Jane Anderson recommended in her Today's Choices:
"Not one, but two outstanding drama productions on Radio 4 Extra to mark Armistice Day. First of all we have the 2008 production of Michael Morpurgo's War Horse, which stars Timothy Spall, Brenda Blethyn and Bob Hoskins....This is followed across the day by an epic drama documentary (Bomber) about an RAF Bomber Command raid on Germany in 1943. It is broadcast in real time and includes reminiscences from the men and women who were involved on both sides."
And journalist/radio reviewer Gillian Reynolds selected Bomber in her Pick of the Day:
"The repeat every drama fan has been waiting for, Len Deighton's novel, dramatised by Joe Dunlop. Starring Samuel West and Tom Baker, directed by Adrian Bean, first broadcast across a Saturday in 1995....Held in memory as a landmark ever since."
We managed to track down the producer of Bomber, Jonathan Ruffle, and he has written a blog for Radio 4 Extra about the making of the gripping drama/documentary. Here is an extract:
"Repeating Bomber on Armistice Day of all days is a massive compliment to everyone involved in the programme. We have also been paid a more subtle accolade. Radio 4 Extra is replicating the original real-time nature of the broadcast....there are other things about Bomber not least the performances, the script, the direction, the authenticity for which we strove, and the remarkable reminiscences I recorded in sitting rooms in Britain and Germany, dovetailed into the action; the effect of all these will, I promise you, be multiplied if you are able to follow the story in real time. Park the iplayer for this one!
As one listener wrote "Thank you for Bomber. It completely ruined my day. I had planned a dinner party, but my guests and I were compelled to sit by the radio right through to midnight."
You can read Jonathan's full and fascinating blog on: www.bbc.co.uk/blogs/radio4/
Bomber starts today, at 2.30 and continues until midnight. Highly recommended.
Mary Kalemkerian, Head of Programmes, BBC Radio 4 Extra 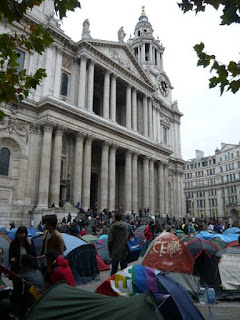 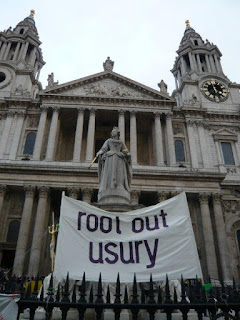 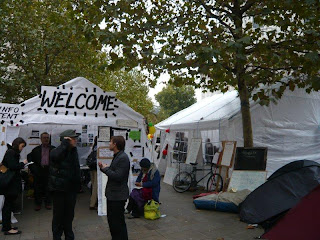 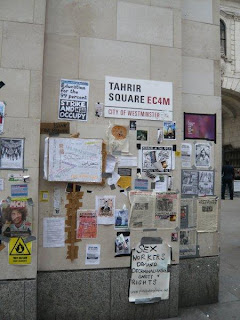 Around the world people are protesting against bankers. I like the Spanish slogan ‘if you won’t let us dream, we won’t let you sleep.’ The protestors against the London Stock Exchange and the City of London have ended up in tents outside St Paul’s Cathedral with a spill-over into Finsbury Square. I hope they achieve some success because simplistically put “ rich people won’t be able to enjoy their wealth if the world is full of violence and discontent caused by poverty.” St Paul’s is at odds with itself because the Christian church preaches how Jesus overturned the moneymen in the temple. Already two of their main men have resigned. (I was horrified to discover that they charge £15 for a tour of the cathedral.) ed
No comments: 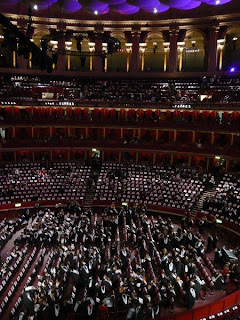 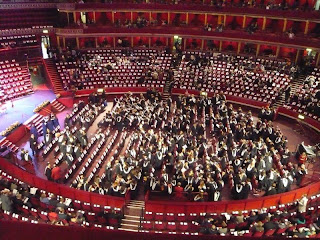 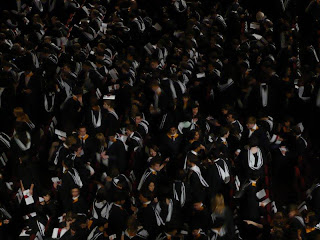 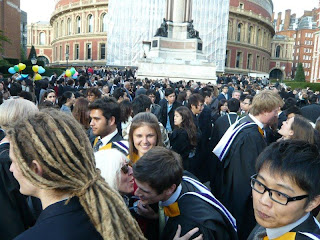 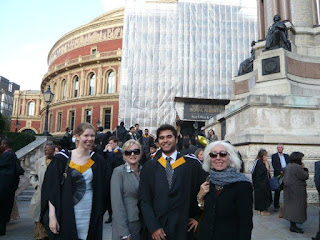 Our grandson graduates from Imperial College. The ceremony is held at the Royal Albert Hall with a 14-string orchestra, a choir and a massive organ. The many hands are shaken by Baroness Manningham-Buller. She used to be head of MI6. She looks very motherly, capable and approachable. We were wondering if she was recruiting spies. But that would be a secret. The sun shone from a bright blue sky. It was a memorable day for all the graduates and their proud families. ed

One of our many action-packed, evenings was at BBC Broadcasting House. Ranging round the block was a long resigned and patient queue waiting to be admitted to participate in the recording of Sandi Toksvig’s Newsquiz. Without any guilt, we slipped through the revolving doors to collect the passes, Mary K had organised for us.
Later, we discovered that the team were working furiously to incorporate the news of the death of Gadaffi into the evening’s programme. Without any doubt, Newsquiz is my favourite radio programme. They are clever-rude-funny and Sandi is the Queen of sharp, pointed, well-informed piss-take. (Regardless of the rubbish Julie Burchill wrote about her.)
However, before that we had a glass of bubbly alongside city gents who the BBC had invited to initiate them to the cause of ‘Children in Need’. I firmly believe all children should be protected and cared for and so I hope those business folk wrote some hefty cheques. Various BBC heads of departments, including Gwyneth Williams, Controller of Radio 4 spoke convincingly for ‘Children in Need’.
Mary introduced is to Jeremy Howe – friendly and charming, he has just written a book Mummy Daddy outlining the senseless murder of his wife by a random killer and his efforts at bringing up his two young daughters. The title of the book was created years ago when he asked his young daughter why she had drawn him with one head and two bodies and she replied “that’s your mummy body and that’s your Daddy body.” Life throws up some immense and unexpected challenges.
Joselyn Morton 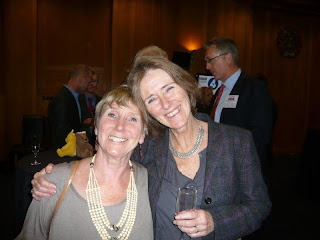 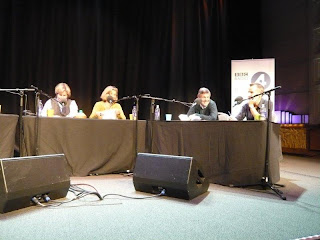