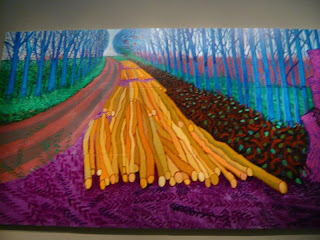 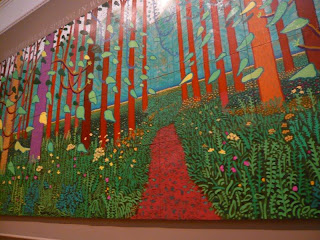 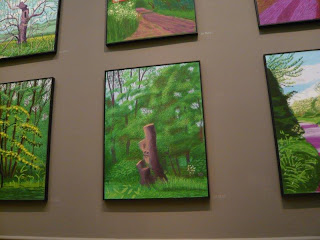 All photos Roger Morton
Some of the Yorkshire landscape work by 74 year old Yorkshire painter, David Hockney at the Royal Academy. The show is a sell-out. Tickets have to be booked well in advance. The attendant I spoke to said no one expected such an immense response from the public. People are divided in their appreciation. Most adore the exuberance of the wild colours, others disdain the lack of realism and the almost slapdash manner of the ipad interpretation.ed 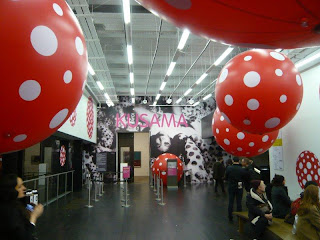 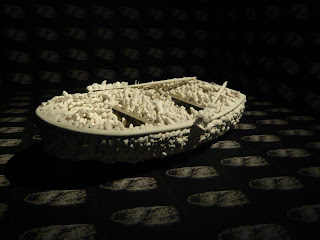 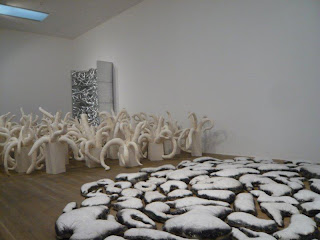 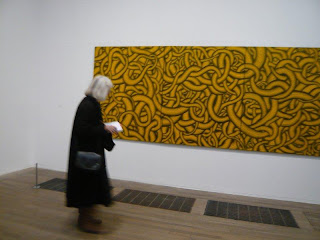 Yayoi Kusama was born near Tokyo in 1929, she studied art after the war and by the 50s had produced hundreds of works. By the mid-50s she was exhibiting at the Brooklyn Museum, USA. Surreal, dream-like and avant garde, by the time she finished her Sex Obsession series, she was working alongside Andy Warhol. By 1977, she was back in Japan and her psychological state of mind led her to voluntarily admit herself to a hospital – where she still continues to live and work. Her work is immense, dense and hallucinatory. It’s also extraordinarily appealing and when it is not different shades of white, the colours are bombastic. ed
1 comment:


Contents 24 Feb 2012
Art: Photos Roger Morton
Ireland: Daren Blake
Cartoon: Claudia Ward
A Song not a Fight: JD Morton
Richard French’s ipad:
Stephen O’R’s Sydney
Radio4 Extra: Mary Kalemkerian
Frid 24 February 2012
The weeks since I last posted totally flew by. We did a lot of stuff but other stuff simply got left undone – so last night we went to see Le Cheval de Guerre in Perigueux and tomorrow night we are going to see The Artist because we like to see as many good movies as possible before the Oscars. Tantalizingly, The Artist was on everywhere in London, but we never had a spare minute in which to grab a screening.
We are so pleased for Jean Dujardin’s nomination because we have been big fans since we used to watch him and Alexandra Lamy at 8pm, every evening for 10 minutes in Un Gars Une Fille.
On a more serious note US soldier Bradley Manning is still waiting for a court hearing after 635 days in solitary confinement. He is accused of dumping military information on Wikileaks – this includes a video of a U helicopter attack on civilians which killed 11 people including 2 Reuter employees.
Before we went to the UK I watched a chilling documentary depicting how for many, many years Swiss children were taken from their families (often violently) and forced to work in indentured labour. I believe this went on right up until the 60s. The squeaky clean Swiss – what a bunch of bastards, doing it to their own countrymen. Sick.
Just as sick as what is happening in Syria right now. Two journalists have just been killed – Marie Colvin and Remi Ochlik.
Now the journalist Edith Bouvier has been seriously injured and may bleed to death if now taken to where she can receive much-needed surgery on her leg.
A cease-fire is urgently needed to get her out of Homs, a city of 500,000 people without water or electricity; soon without food. I may have mentioned before that Syria does always send a shiver down my spine because our grandson Mitchell’s other Great grandfather was killed there during the 2nd World War. (He was the first Maori to be the Commander of the Maori Battallion). How long is this senseless killing going on for?
Like many, I felt a great sadness at the death of Whitney Houston.
So my darlings, live life to the full. Realise your dreams et bonne chance avec tout
Joselyn Morton

Count down to spring
Surrounded by sea and influenced by Gulf Stream, Ireland's winters can be mild. This one certainly has been. Daffodils are in full bloom already, the first ones were seen in Dublin a month ago. Many Irish will tell you, as they tell me on a daily basis, that this year has been a wonderful winter. What they mean is that the temperatures have been mainly above freezing and their heating bills are way down on the last couple of years. I would describe it differently. It has been dull, grey and miserable with only a handful of days where blue sky or the sun were actually visible.
Ireland does have a reputation for this sort of thing. The Romans never conquered Ireland. They arrived in the summer, were shocked by the weather, gave the little emerald isle the name "Hibernia", meaning something like "wintery place", and high tailed it out of here.
Newgrange, classified by archaeologists as a passage tomb, was constructed over 5,000 years ago. Older than Stonehenge and the Great Pyramid of Giza, it is designated a World Heritage Site by UNESCO. Known as a place of astrological, spiritual and ceremonial importance, Newgrange is a large kidney shaped mound covering an area of about an acre. It has a 19 metre long inner passage leading to a cruciform chamber with a corbelled roof. The most interesting thing to me is that on the shortest day of the year (the winter solstice, 18th December) the sun shines directly down the passage to the end. Demand is so high that to be there to watch this, a lottery is held, from which a few names are picked every year. I do agree that its concept and construction are marvellous, especially considering its age. However, having just spent the entire winter here, I can truly understand the focus and concern of the people as the days became shorter and shorter. I myself went for a sunbed to try and get the feel of the sun. I think this tomb was the centre piece for huge celebrations held following the shortest day of the year. With no artificial light, imagine their relief that the sun was not going to disappear completely and the days were going to get longer again. It must have been tremendous. Huge celebrations began.  It is not surprising to me that monuments, stones and ceremonies centred around the sun. Holly and ivy were brought into dwellings, to bring a bit of life into the place. Much later the church took over this celebration and decided to use it to celebrate the birth of Christ. Yes indeed Christmas and many of its trimmings are pagan festivities originally centred on the sun. I wouldn't necessarily call it ‘worshiping the sun’, just an appreciation of its life-giving properties and its vital importance for all life forms.
Personally I preferred the winter of 2011. COLD: minus 15 celsius on a few occasions. Roads were too icy for anything but four wheel drives. (Finally all those who had been sucked into keeping up with the Joneses during the economic madness, who had  possibly never been off a tarmac road or out of suburbia were able to justify their monstrous fuel guzzlers and huge car loans.) Mains water pipes and household water pipes froze and burst everywhere. (Remembering that most of this water pipe network had only been put in in the recent past, it will tell you something about the hurry with which it was all put in. Not deep enough, not insulated enough, but that is another story!). We ran out of water in places, partly because a lot of people turned on their taps 24hrs to keep the water flowing and stop them freezing. Trees died. Entire hedges died and their skeletons are still across the whole country.
It was a huge shock. The country came to a complete standstill. In fairness, it was the coldest winter in about 60 years and people had begun to plant, plan and build for the climate that the last 2 generations had become accustomed to. In the 1940's my mother and father-in-law both had their own set of ice skates for the lakes and rivers. Nuns tell tales of sneaking off to go ice skating to warm themselves. Societal memory seems short when it comes to planning.  But back then and last year, though very cold, IT WAS SUNNY.
Tomorrow I am off to Morocco for two weeks for one simple reason, I need some sun.
Daren Blake
No comments: 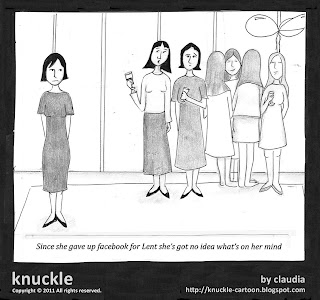 A Song not a Fight
Too hot, too cold
too young, too old.
too easy, too hard
a mile, not a yard
too long, too short
too loose, too tight
a song, not a fight
Joselyn Duffy Morton
No comments: