Contents 21 October 2013
www.endecocide.eu: Joselyn Morton
2 very different exhibitions: Joselyn Morton
Top Secret Comedy Club: Joselyn Morton
Ashmolean’s LiveFriday: Joselyn Morton
go to Older Posts … grrr!
Catweazel Club: Joselyn Morton
Steven Berkoff’s Religion and Anarchy: Joselyn Morton
Guilt hits: Joselyn Duffy Morton
Solares Hill: Richard French
go to Older Posts … grrr!
Stephen O’Rourke’s Bali
Cover Caption: Roger Morton
Editorial 21 October 2013
September was a full-on eventful month; October has drifted past in a sneaky quiet way. I had determined to do a new posting in the weekend but our electricity was cut off. No shit. We were abruptly woken at 1am, Sunday by rain dripping then pouring onto the bed. Rude.
We stumbled into action, bowls, towels, disbelief as the rain changed to hailstones. Merde. The noise was as though a huge concrete mixer filled with big stones was in full force on our roof; for extra drama, lightning cracked, thunder roared and bellowed. Fucken hell, it was scary.
Eventually it stopped. In the dark, we decamped to the rose bedroom ─ for at some point the electricity cut out and stayed off until 3pm Sunday. Roger rigged up a temporary generator using the battery from our little old black Citroen Visa ─ to power the pump on our central heating (which runs from the fire in the sitting room). Using a torch, I found candles and soon the rooms were romantically lit and the relentless noise of the hailstones began to lose its terror. Roger poured me a crystal glass full of Isle of Islay single malt whisky and I settled down on the big blue sofa under a soft Irish wool rug. While Roger braved the outside with his camera and a torch, I admired the fire, sipped the whisky and read the rest of the night away.
Now, I feel ready to commit to regular blog postings ─ no excuses. 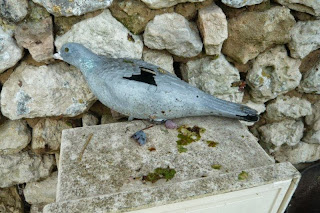 (collateral pigeon damage from the hailstones)
I spent three weeks in the UK in September. I went with Fred and Matt to Vivienne’s memorial. Her kids had organised everything beautifully. It was a grand send-off, she would have loved it. (In fact her daughter, Oonagh said she wished they had done it while her mother was alive.) Oonagh’s father John performed the Hikime Shiki ceremony for Vivienne. It dates back a thousand years – the whistling arrow was thought to drive away the negative and attract the positive  (the tip has a flute-like bulb).
Simultaneously, in Cavan in the Irish Republic, John’s brother Paddy shot a whistling arrow towards the West as John shot his (over tall trees at the bottom of his garden) into the East and although the arrows will not meet on the physical plane it was hoped that spiritually they will blend as a heart-felt tribute to a dearly missed friend.
Mid-week, before setting off for Oxford, I headed to friends’ beautiful pink art deco house in Putney. Nice. I think the 30s could have been my era – but then the décor was slipped in between two hellish world wars. Is anything ever perfect? Jan and I had a few happy hours wandering around the National Portrait Gallery. Admire Dame Laura Knight’s work immensely, including her stylised scenes of women’s war effort in factories as they assembled airplanes. Classy stuff.
At the end of September I had a week-long unplanned celebration of my birthday beginning on a Wednesday in a friendly Lebanese restaurant in Oxford where the owner was a client of Matt’s and consequently we were fine-dined. Thursday, Matt took me to Catweazel, where he was playing harmonica; there fuelled by my first sip of white wine, I heard myself say to him at half-time, ‘you know that tablet gizmo that your Dad gave me for my birthday, it’s got all my poems on it’. Whereupon Matt replied ‘I’ll run home and get it and you can read some here.’ Prodded by Vivienne’s death and that in two days hence, I would be propelled into another decade, I heard myself agree,
In minutes, he was back, I found the poems, we listened and applauded musicians and poets; Matt played an enchanted set that seemed orchestrated in many dimensions and then it was my turn. I did it and dizzy with the resounding applause, I felt ready to whack into another decade.
The following evening it was the Ashmolean’s Live Friday. Stunning as it normally is, filled with musicians and performers, the Greek, Roman, Egyptian exhibits truly came alive. Saturday was my actual birthday and it began with a layered pancake and honey cake, a walk to ballet with the granddaughter, a comfortable bus ride to London, opening presents with Fred and a lively party at Mary K’s in the evening as she was also having a week-long birthday celebration.
Sunday evening, I high-tailed it to Chelsea where Dominique spoilt me for the rest of the week, beginning with dinner at Bocca Di Lupo in Archer Street on Monday evening (chosen by Bill as Jacob Kennedy the chef is a friend of his.) We had a tasty feast and I have kept the menu for inspiration.  The evening ended with me chatting to a young couple from Queen’s Park who had been married the day before and were having a secret 3 days in Soho. By this time, we were across the road at Gelupo sampling their delicious icecream. It always pays to have a foodie friend.
Tuesday, darling Nancy took me to a friendly spacious Hammersmith pub for lunch ─ so relaxed and we never stopped talking. The birthday didn’t stop there, Dominique was determined to make it momentous – we went to Woody Allen’s Blue Jasmine (loved Cate Blanchett and thought Sally Hawkins still managed to wickedly shine in the gaps.) we burled by taxi to Steven Berkoff’s Religion & Anarchy where we met  Linda Marlowe (Steven’s leading lady from the 70s and 80s). We had all had dinner in a Chelsea pub the night before and there concocted this Jermyn Street Theatre plan. I had been so delighted to see Linda again that I managed to set my menu alight on a flame-throwing candle ─ luckily Dominique spotted it and we whacked it out.
When we weren’t rushing out to have fun, we were watching the boxed set of Newsroom or wandering across the road to the tiny café for another Italian lunch or coffee.
Thanks mates, it was grand – love to all, Joselyn Morton

www.endecocide.eu/‎
The destruction of our environment is a crime. A crime for which those responsible should be held accountable. This crime has a name: Ecocide.

Camley Street Natural Park is in Kings Cross. They hosted an evening for the campaign End Ecocide in Europe as the deadline for the 1 million signatures that the European Commission require is getting ever closer. It was a great night, huge helpings of tasty hot food, friendly locals, good music, 2 journalists from Camden Community Radio happily interviewing the musicians, the endecocide campaigners. Good stuff
According to a chap I chatted to, Camley Street used to be the pits. The weed-infested verges were full of used syringes and the pavements were dangerous unlit haunts of Kings Cross prostitutes. What a transformation – it is a delightful place now. Their brochure describes it as a London Wildlife Trust environmental education centre located in an inspiring 2-acre urban nature reserve. They concentrate on air quality, recycling, climate change and renewable energy. The plan is that food waste will be macerated and mixed before being pumped into a digester. Cleaned biogas will generate electricity and heat for the centre during winter. In summer, raw biogas will be used for cooking and water heating. The fertiliser will support algae and hydroponics trials. (“In the middle of London” as Dad in Steven Berkoff’s East would have said.)
In Camley Street Natural Park, EndEcocideinEurope has good well-intentioned supporters – but the truth of the matter is that 1 million signatures is a lot of signatures.
My first Sunday in London, Fred and I joined the EEE campaigners on the Greenpeace Polar Bear march, overcoming shyness and approaching strangers for their signatures. Hundreds of people cheerfully walked behind the large robotic Polar Bear from Westminster Abbey over the bridge to Shell House. There, two Inuit women spoke knowledgeably and convincingly of Shell’s oil drilling in the Arctic and how their people did not want the Arctic’s fragile ecosystem damaged by Shell’s drilling. Of course since then the Arctic 30 has happened and thirty people are now imprisoned in a Russia.
My third EEE signature-seeking day was at the lovely smelling LUSH shop in Oxford. I would not say it is easy to get signatures, one has to pour personality into it. It’s a slog.
However once those 1 million votes are collected, the European Commission is obliged to fully consider opening up the legislative process to end Ecocide (the extensive damage to or destruction of ecosystems throughout the European Union). As I have never campaigned for a cause before, I hope friends’ family and ex-colleagues will seriously consider what I am asking – better still, inform their friends, family and colleagues about the need for the 1 million signatures.
Joselyn Morton
No comments: 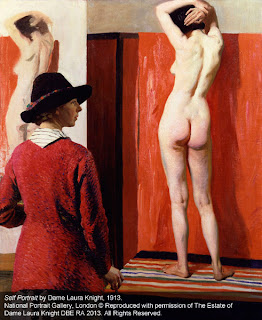 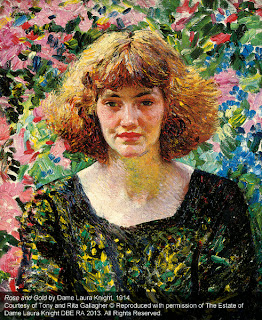 
The National Portrait Gallery is showing Dame Laura Knight’s work. She did damn fine paintings. Conversely the large exhibition at the Saatchi Gallery left me irritated and mulishly unfulfilled. Roger and I have been trying to get into the Saatchi Gallery for the last few years and it has always been closed, so I was pretty pleased to stroll on in with Dominique (it is practically at the end of her Lower Sloane Street living room.)
‘Nah’ we thought. It all seemed so tepid, contrived, soulless ─ over-sized experiments in paper and muddy colour) Curiously, I have just been flicking through the inexpensive catalogue of small, black and white images and  they have more appeal now than when I saw them in their ‘artistic flesh’ The copy likewise makes appealing reading, par example “Varelas’ works stage collisions between the optimism of modernist avant-garde aesthetics with the discarded clutter of contemporary Europe in the fallout of the 2008 economic crash.”
I remember the collages in question and pretty much all I can say is ‘bugger me’.
Joselyn Morton


(Above: Self portrait; Rose and Gold, Dame Laura Knight ) 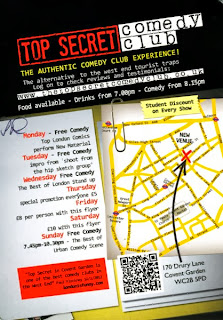 Covent Garden’s Top Secret Comedy Club in Drury Lane may not be a secret for much longer if those queues keep snaking round the block. Stand-up comedy there is definitely alive and kicking. What’s not to like – central, easy-to-find; whacky, clever acts, the MC Mark is always ten points ahead of the game; friendly staff, good acoustics, well-run bar, Saturday nights are already booking out, I predict it is going to be the place to be any time soon. ed
ps I am already  a big fan of Jack Whitehall because of the TV series Fresh Meat (in which our darling friend Charlotte Ritchie is core cast also.)
No comments: