Contents:
Bees for Berwick Advertiser: Graham White
Young Stranger: Joselyn Duffy Morton
Cover photo: Roger Morton
It was 24 degrees today, but evidently it is going to rain tomorrow. Never mind, it was a faultless gift. We are off to the UK on Thursday, so between now and then the weather doesn’t matter too much as we have so much to do (although there are a couple of patches of weeds in our top garden that I would like to blitz before we head off. It’s hard to do that in the rain.) A darling old friend (who I can trust not to mind my pre-packing mess) came to lunch today and my boeuf bourguignon was delicious. (Sorry to all my vegetarian friends but you must already know what a weak-willed woman I am when it comes to food.) I now totally trust my SuperU butcher. We had dessert and coffee outside in the sun; today is the first day for months I haven’t worn woolly tights and socks under my thick trousers. It felt like heaven to feel the sun on my skin again. This winter has been too long.
The sun is not the only thing to celebrate, UK folk are madly celebrating Maggie Thatcher’s death (I am now going to piss off the other half of my friends.) French folk not so much – she didn’t have such a disastrous effect on their lives (although Jacques Chirac was evidently heard to say to Maggie Thatcher during negotiations in Brussels (when he thought the mic was off) something along the lines of ‘Qu’est-ce que vous voulez - mes coquilles sur un plateau?’ ie ‘what do you want, my balls on a plate?’
If you think I am being extreme, read Lucy Mangan’s weekend column in the Guardian this week. Both her parents (her mother a doctor in deprived areas and her father at the National Theatre) loathed Maggie Thatcher.
Balancing the legacy of misery she imposed and left behind are the surge of jokes that have emerged this week: ‘She’s only been in hell 20 minutes and already she’s closed down three furnaces’; there were typos from the BBC and the Irish website The Journal – both reported that ‘Maggie Thatcher dies following a strike’ and ‘Maggie Thatcher died from a strike’. Somewhere I read ‘Iron Lady rust in peace’.
One aspect that still makes me mad is since her ‘right to buy’ strategy, state council houses (on controlled rents) got sold off and there is now a great lack of affordable houses for people in need to rent. Step in ‘private enterprise’- people on housing benefits now pay their state benefit to private landlords ie state benefits go straight into the pockets of private individuals - the state is providing profit for private landlords (whereas pre-Thatcher, the state owned the houses that Council tenants rented. That seems like a better way of using taxpayers’ money!).
To conclude on this hard-assed woman – my dictionary describes society as 1. The totality of social relationships among organised groups of human beings or animals. 2. A system of human organisations generating distinctive cultural patterns and institutions and usually providing protection, security, continuity and a national identity for its members.
Thatcher was famously quoted as saying, ‘There is no such thing as Society. There are only individual men and women and their families’. She did her best to turn the powerbrokers of British society into hard profit-making self-seekers. Can a caring British society ever emerge again – or is it on a continuous callous course of every man and woman for him or herself?
The words selfish and selfless sound so similar and yet they are worlds apart.
A good start is the campaign for End Ecocide in Europe. They want to make ecocide a crime – this would mean that individuals in positions of superior responsibility (whose business actions caused damage to the earth) could be made accountable by law for their crime and punished (not pay fines which their company had the contingency funds with which to pay the fines) but by the individuals actually going to prison; something which those top dogs with wonderful life-styles might not actually be prepared to stomach. Therefore, they might bail; they might think twice about the damage they were causing and modify or change the policies of their companies so that they were no longer having an adverse effect on our eco-systems (air, water, oceans etc). End Ecocide in Europe needs signatures so that the European Commission and the European Parliament will fully consider opening up the legislative process to end ‘Ecocide’ (the extensive damage and destruction to ecosystems in the EU.) I believe – they need something like 1 million signatures by January 2014. Check out their website www.endecocide.eu– this might be a cause that could have great benefits for you, everyone you know and for future generations that you don’t know.
Sleep tight, Joselyn Morton (editor)
No comments: 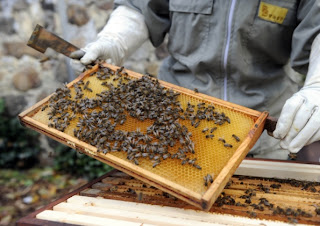 The Berwick Advertiser asked me at very short notice to provide 600 words  for this week's paper
(published 12 April 2013, see below)
Since 1992 over 10 million honeybee colonies have died around the world: a million hives died in France, six million in America, hundreds of thousands more in Germany, Italy, Holland and the UK.
It is not just honeybees that are dying: bumblebees, butterflies, garden-moths, grasshoppers, beetles, ladybirds – are melting away like snow off a dyke. Frogs, toads and newts are becoming rare in any area where crops are grown.
Most young people have no idea that this ecological collapse is taking place. They have never seen telephone wires crowded with hundreds of sparrows, swallows and starlings. Ordinary, common experiences of childhood are fading from sight.
We are also seeing a near-extinction of many bird species in town and countryside: millions of sparrows and starlings have simply vanished without trace; skylarks have declined by 90%, partridges by a similar amount, yellowhammers, linnets, corn buntings – the list goes on.
What is causing this ecological disaster? The European Commission, the Food Safety Agency and the current House of Commons Inquiry have combed through dozens of scientific studies and they all agree: it is the use of ‘systemic insecticides’ called neonicotinoids.
Before 1990 most pesticides were sprayed onto the leaves of a crop; they soon washed-off in the rain or were neutralised by the sun. But you cannot wash-off systemics – they are ‘inside’ the food; we are all eating them. They are applied to the seeds of: wheat, barley and oilseed rape, but also to apples, tomatoes, plums, peas, beans and potatoes; they poison the entire plant from root to flower and emerge in the pollen and nectar, killing bees and any insect which visits the flower.
Farmers have no choice in any of this; they did not create this system; it has been imposed on them. It is now almost impossible to buy ‘untreated’ seeds of oilseed rape; they arrive at the farm gate pre-coated with neonics.
The good news is that the EU intends to ban them in three weeks’ time; the recent vote in the Commission was 13 countries ‘for’ the ban – including France, Italy and Holland; 9 countries were ‘against’ the ban – and 5 ‘abstained’ – including the UK. Agriculture will not collapse.
Many farmers are very unhappy about the trap they are caught in and many of them are the best conservationists around; most beekeepers are convinced that the scientists have got it right, and want neonics banned.
•Graham White
Graham is a beekeeper member of Friends of the Bees


Young stranger
Glimpsed a photograph of
a young stranger
in a dark blue suit,
shining lining flapping
as he jumps for joy
tossing his smart new hat,
revealing his immaculate
white shirt, his happiness so
contagious I want to catch it
Instead I remember him in my mind
when things go wrong,
when life is hard,
senselessly,wickedly cruel.
Joselyn Duffy Morton©
No comments: 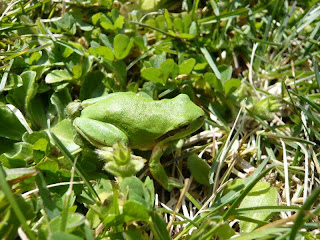 Roger Morton
When this green frog appeared in our garden, it seemed a sure sign that spring had arrived (finally).