Am determined to post a blog before September swans in. Want to hammer the summer down, don’t want it to end. We’ve been people-busy, it’s been great. And it’s not over yet, more good friends arrive day after tomorrow. Therefore tomorrow is D-Day and my list still looks formidable. What do I do with my time? I think I’ve lain in the new 5 euro vide grenier hammock once and that was to check that it would hold my weight. However, it has been a very fun social time, the glad-rags have had a fair pounding.
Just after my last editorial, Barnaby Jack, a computer hacker died in San Francisco aged only 35. (Second famous young hacker to die this year). Jack was an ethical hacker who could get a ATM machine to spew out its dough. Cyber Security firms hired him (who? what?)
He claimed he could kill a man from as close as 30 feet by remotely attacking heart pacemakers. NZ born (an expression no other country uses eg no ‘England born’ no ‘France born’. The reason is so many NZers leave the country and years later, people don’t even remember they came from NZ; only 60% of the inhabitants were born there.)
I digress. It's sad such a clever young man is dead. The cause of death has not yet been released.
These days whenever I hear of a plane, train, bus crash  I think someone has hacked into their computer system and caused the crash to happen. Have not yet heard of any incidents where this is suspected but in the last few months there have been some very odd, unexpected and tragic crashes.
Seamus Heaney died  today. I was sad about that too, he was a poet whose work I liked. I have included my favourite poem of his ‘Punishment’.
Recently met Luan, an interesting actress from Brighton. She has had her funding cut for her latest theatre project. She is stubbornly re-applying.
I like Cherry Mosteshar's (The Oxford Editors) comment on facebook:
When Winston Churchill was asked to cut arts funding in favour of the war effort he simply replied ‘then what are we fighting for?’
This morning I was very pleased that UK Parliament had voted not to go to war in Syria. I know the chemical warfare there is disgusting especially the numbers of children already killed and injured but the world doesn’t need another war. Besides how could the UK afford war – the Government bleat on that they can’t afford NHS, Libraries, Museums – but they can magically afford weapons. Arms dealers should be named and shamed.
I think I have worked out why Boris unexpectedly is making overtures to Ozzies and NZers about being able to live in the UK. He is covering his bets in case Scotland goes independent and they open their doors to the Antipodeans (whose ancestors died in droves in the 1st nd 2nd World Wars to defend the ‘Home Country’.
If Britain loses Scotland and Scotland starts increasing its population, the balance of power might tilt awkwardly into a downward spiral that inspires Wales and Northern Ireland to follow suit.
Funny old world.
I hope people who read my last posting immediately signed the Endecocideineurope petition.
It is really important. If the law to make ecocide a crime comes into effect, it could be a very powerful law indeed. For example, it could stop fracking, the people responsible for fracking could be imprisoned. It could effect contracts worth billions of pounds – it is an important piece of legislation.
Humour me, take a look at the website www.endecocide.eu
Hang onto the summer for me, à bientot,  Joselyn Morton
No comments:

A gallery owner with Gallic pride
welcomes us inside
I sink into his leather chair,
the air outside
stifling still (would a slave
have fanned the Roman cool?)

Today in China, slaves labour
seventeen-hour days in factories
despair fills their hearts,
they lunge out of windows
but wily foremen erected nets to catch
their plunge, keep suicide figures down.
Why don’t they put wages up?
The poisoned Apple lives up to its name
customers suspect their shame.
Profit margin a death sentence
for young Chinese girls
persuaded to leave village poverty
work in a smart, heartless city.
Fiscal greed knows no country
no boundary, no expiry date
greed lasts and lasts.
Ask any CEO with a past.
Joselyn Duffy Morton © 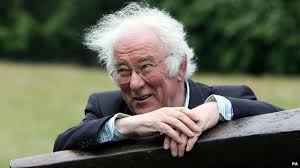 Sadly, Irish poet Seamus Heaney died today. Below is my favourite poem of his (ed)

Punishment
I can feel the tug
of the halter at the nape
of her neck, the wind
on her naked front.
It blows her nipples
to amber beads,
it shakes the frail rigging
of her ribs.
I can see her drowned
body in the bog,
the weighing stone,
the floating rods and boughs.
Under which at first
she was a barked sapling
that is dug up
oak-bone, brain-firkin:
her shaved head
like a stubble of black corn,
her blindfold a soiled bandage,
her noose a ring
to store
the memories of love.
Little adultress,
before they punished you
you were flaxen-haired,
undernourished, and your
tar-black face was beautiful.
My poor scapegoat,
I almost love you
but would have cast, I know,
the stones of silence.
I am the artful voyeur
of your brain’s exposed
and darkened combs,
your muscles’ webbing
and all your numbered bones:
I who have stood dumb
when your betraying sisters,
cauled in tar,
wept by the railings,
who would connive
in civilized outrage
yet understand the exact
and tribal, intimate revenge.
–Seamus Heaney, 1975
No comments: 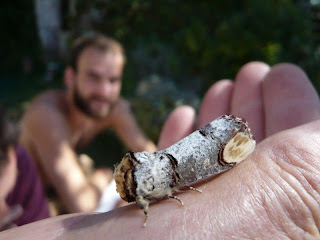 This is not a twig like you may think – it is a moth (full camouflage gear). Lovely Felix in the background (for once being up-staged.) Photo: Roger Morton