A Dream
I dream of an old friend
who is wearing women’s clothes.
His wife watches fondly.
I’m the one perturbed
disturbed and anxious.
Shocked hot and sweating
I want my man friend back
I don’t care for his womanly
hair, his sexy short dress
I feel my blood freeze but
he’s completely at ease
his children secure, safe
in his mumsy embrace.
When I wake from the
cloying depth of my dream
he stays trapped with me
though he died years ago.
Joselyn Duffy Morton ©
No comments: 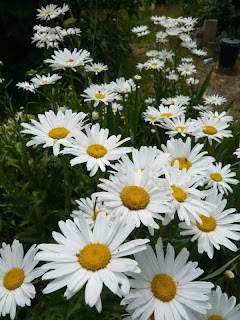 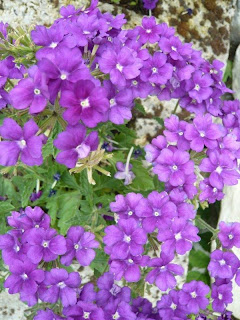 Summer flowers
For a while our garden looked not too bad – then we didn’t get any rain and it lost its lustre. ed
No comments:


This year was the 25th anniversary of La Fete de la Musique and also the25th anniversary of the piano festival at Petignac. It is our favourite festival. My cousin, F-A flew down from Brussels for it and once again she loved it. Set in a large manoir amidst a spacious garden, the atmosphere is one of charm and pure delight. And when you are hungry or thirsty, there’s food and drink sitting outside in the dusk. Not a wrong note.
Inside one is knee-deep in pianos – last year I counted 7 Steinways.  One would like to be in half-a-dozen places at a time, there is so much going on. By chance we went upstairs and caught the end of a dark-haired woman playing. Then to my surprise the man sitting next to me stood up and seemed to modestly suggest to two or three other men in the front row, that perhaps he should play. Up he went and for the next hour we listened to some perfect Chopin. Magic. (Later we discovered he is not a professional pianist but an eye doctor in Bordeaux. Wild.)
On going downstairs, we found three teenagers on three pianos seriously playing the same pieces whilst outside various groups played jazz, blues and sang to relaxed groups of spectators. Our favourite Seven Sons (with a showing of ‘five’) didn’t disappoint. They have a grand sound with Paul’s expert fingering on guitar, Rob’s unique bass, Fred’s emotive harmonica, a new drummer who seemed very at ease and Keith’s voice effortlessly holding the audience in trance. It was too short. I know they are having problems but I hope they manage to resolve them as singularly and collectively, they are a fine bunch of musicians and we don’t want to be deprived of the music they make.
Joselyn Duffy Morton 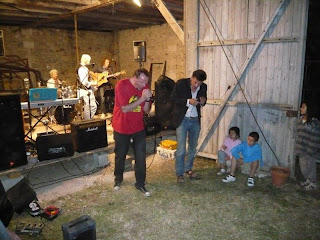 Hello again,
I am a fan of Michael Morpurgo's writing and last November I was pleased to be able to broadcast a repeat of the wonderful Radio 2 production of Michael's acclaimed children's novel , War Horse.
Originated at the National Theatre in 2007, the stage play has sold over a million tickets. This breathtaking and emotional production has also been a huge success on Broadway, so I was not surprised to see that War Horse scooped up five awards in New York last Sunday at the annual Tony Awards (which recognise and celebrate excellence in live Broadway theatre).
We can’t bring you the stunning visual effects of the stage play, but you can hear our powerful radio dramatisation of War Horse later this year on Radio 4 Extra.
On Wednesday this week, I attended a modest awards celebration - worlds apart from the Tony's - but nonetheless tremendously important for the future of Radio Drama. The awards were for the winners and runners-up of the Carleton Hobbs  Bursary and Norman Beaton Fellowship, BBC Radio drama initiatives under the umbrella title Soundstart, providing the opportunity for actors to win a contract for five months working with the prestigious BBC Radio Drama Company.
Both schemes attract interest from actors who are keen to add Radio work to their career. The Carleton Hobbs Bursary is aimed at actors graduating from the UK-wide accredited Drama Colleges, and the Norman Beaton Fellowship at actors who, though already professional, have not come into the profession via a traditional Drama training route.
Over the years more than 160 actors have launched their careers through these events. The Carleton Hobbs Award was started in 1953. Ted Kelsey (familiar to many of you as Joe Grundy in The Archers) was one of the first winners. You have probably heard many of the winners and runners-up in numerous radio dramas, including our own interactive drama, Chain Gang.
Here is more information on Soundstart, with a complete list of winners from 1953 - 2011:
http://www.bbc.co.uk/soundstart/
I was interested to note that Anthony Daniels was a Carleton Hobbs winner in 1973. Anthony completed his contract with the Radio Drama Company - and thereafter his BBC radio career ended - as he took on the role of the body and the voice of the droid C-3PO in Star Wars. He voiced the character in all three parts of American National Public Radio's dramatisation of Star Wars, and reprised the role in various animations, audiobooks and promotional works.
In addition, Anthony was the voice of Legolas in a 1978 animated adaptation of Lord of the Rings.
As fans of Radio Drama know - it' s all in the voice.
Mary Kalemkerian
Head of Programmes, BBC Radio4 Extra 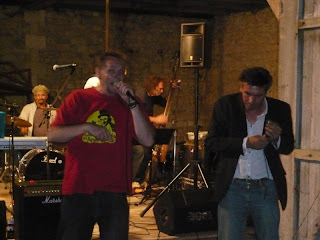