The last cover for the blog was shot in Esperaza (near Carcassone). We were there visiting a very good friend, Vivienne Chandler. Sadly 6 June, Vivienne died of the cancer that she had been so fiercely battling for the past four years.
More than 40 years ago we met in London through an agency called Gentle Ghost, who we had approached as we were looking for a lodger. In those days, we lived in a 4-storey house in Kentish Town. The evening Vivienne arrived to look at the room, we had dashed back from a press screening of a film ‘Duck you Sucker’ with James Coburn. (Our old friend David Warbeck, from NZ who went to Southland Boys with Roger and then won the Queen Elizabeth scholarship to RADA was also in it.)
So was Vivienne – it was such a wild coincidence that we became instant friends (she, of course, moved in to 91 Bartholomew Road, with us). She was lots of fun, generous and very beautiful. The French journalist that Roger worked with on Rock and Folk magazine fell in love with her as soon as he saw her. They were on the front page of one of the dailies ‘Week of L’Amour in Kentish Town’. We all drove to France in a blizzard of snow for the wedding.
When Roger’s parents came to visit from NZ, we drove down to see Vivienne and Bernard on the way to Greece. Over the years, there were many encounters. It is hard to accept that there will not be any more. She will be always be a very Gentle Ghost.
On 24 June, Vivienne’s 21 year old daughter, Oonagh Bush is participating in the Cancer Research UK fundraising  run, she would definitely appreciate your support.
http://www.raceforlifesponsorme.org/oonagh-and-oena?ref=nf 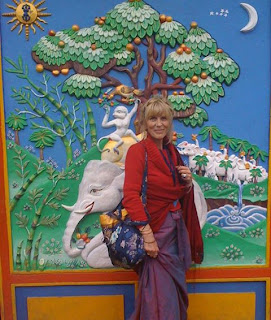 For years I have known that the only way to successfully learn a language is to sleep with someone. However I rather imagined the circumstances somewhat differently to the 6 days and nights I have just spent in Bordeaux. I shared a room with Bernadette (we had both just undergone surgery) the most lasting memory is the heat. (But my French did improve).One wall of our room was all window, my bed was alongside it. The sun was relentless, I thought ‘I haven’t undergone all that surgery just to get slowly cooked alive’
I desperately needed to cool down. I was allowed a shower but afterwards my efforts to clothe myself in my stripey Croix Rouge pyjamas were a sad failure.With my limited spatial intelligence, it all proved too difficult. I couldn’t figure out how to get all the tubes, drips and what-have-you up the trouser leg. I rang Roger to bring me boxer shorts and in case his were too wide, to also bring me a black skirt covered in tiny flowers which I have been wearing around the house and in the garden summer after summer. He arrived and cheerfully handed me the bag he had brought. Inside was a very smart silk chiffon dress (our daughter had bought it to wear to a wedding and afterwards decided it was too grown-up for her and gave it to me). ‘Where’s the skirt, Rog? I asked. Confidently he pointed.
I said, ‘that’s a dress’.
‘Is it?’ he demurred (this is a man who can identify spanners, crow bars, chisels in the dark at a 20 metre radius).
In all these years, he had learnt nothing from me.
I couldn’t lie in bed in a frilly frock, they would think I was barking mad (I couldn’t pull a sheet over to hide it, it was much too hot for that.)
I willed the boxers to work. Luckily Roger had also brought a pair of the grandson’s. They fitted perfectly. I wore them on top of the regulation Folie Bergere black stockings, with the 10cm lacy frill at the top. (These are to prevent the dreaded DVT) There was no way I was pulling a sheet over me – I was already frying in the heat. I lay there in all my daftness, willing the sun to feck off.
My room-mate was decked out in a nightie with short sleeves (she had obviously read all the pages of the pre-admissions).
Now I am home again, I am aware of the bravery of Edward Snowden, the floods in India, the protests in Brazil and Turkey, Russell Brandt talking total sense, the NHS cover-up of the tragedy of the dead babies scandal, the US hostage who the Taliban might swap for 3 hunger-striking top guys from Guantanamo Bay, the bankers bonuses and the fact that rents in London have gone up 8 times as much as wages and the BoJo Mayor doesn’t seem to give a flying fuck.
However, it is almost as though post-operative euphoria has encompassed me and I have landed in a problem-free bubble. Soon I am sure the pain of it all will penetrate. Meanwhile, long may it last.
Joselyn Morton 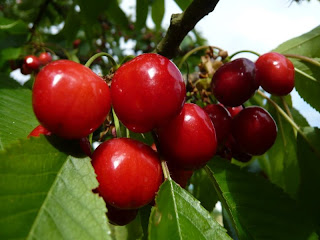 While I was in Bordeaux Hospital, Roger brought me cherries from the tree (ed) 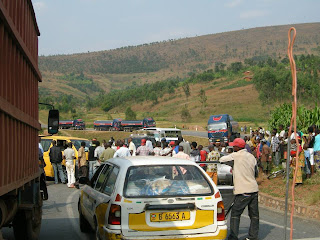 Muyinga, Burundi
Cars and trucks en route to Murinya, - one of the many road accidents I’ve seen in less than a week here in Burundi. This collision completely blocked the route so traffic had backed up in both directions as we waited for the local police to come and do the ‘consta’. No fatalities this time, but some seriously injured people were taken away to the nearest medical post (the huge rucks are en route from Tanzania to Bujumbura). 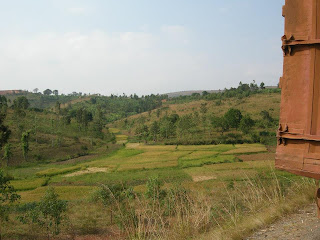 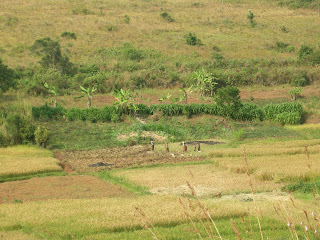 Working hard in the fields 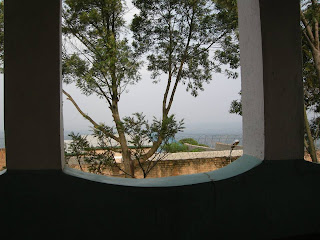 View from the terrace in my nw home, thanks to a very kind colleague who has invited me to use her spare room  in a sweet little house next to the office. 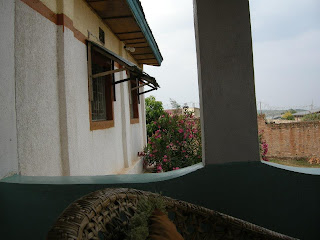 The back garden of my new shared pad 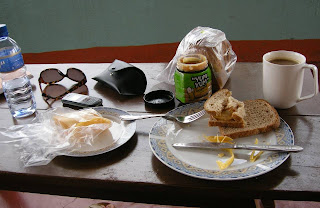 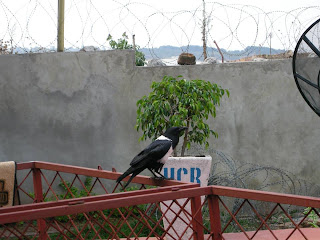 One of the many, many massive crows in Muyinga. Having just watched 'The Girl' (about Hitchcock's making 'The Birds' with Tippy Hedron) on the plane last Sunday, I am a little hesitant to get too close.
Images and text: Chrissie Mougne
No comments: